Neuroscience and the jury system:  How can they best coexist?

By Nancy Neufer and Rob Duboff and Lori Holmes

Since the U.S. legal system was inaugurated at the birth of our nation, scientists have developed a great deal of knowledge about how humans process information and make decisions.  Unfortunately, little or none of it has been applied to the rules of how our trials are actually conducted.   Most critically, in the vast majority of American courtrooms the jurors’ role during trial remains a passive one and jurors are given no guidance as to the decision criteria until AFTER they have absorbed all the evidence and arguments, and then never are instructed about how they should structure their deliberations once the case is theirs to decide.  Withholding the rules that jurors are supposed to follow in reaching their decision presents challenges for all jurors, but is a particularly frustrating roadblock for the rational thinkers on the jury.

Even with this structural obstacle, the core of the jury system is premised on a fairly rational model.  Jurors listen to evidence (within legal bounds), and, at the end, are given perspective from each side before being instructed about the standards to use to evaluate the evidence.  And, only then should they discuss, debate and decide the case.  Yet, the growing discoveries of neuroscience concerning the way humans process information are at odds with the jury system structure as we currently know it.

The first challenge presented by the current paradigm of a rational jury system model is the fact that most humans decide emotionally, not rationally, and do so quickly (and most often unconsciously) with heavy reliance on their pre-existing beliefs and experiences.  Neuroscience has confirmed this idea and has proven a number of things that are fundamental elements of jury decision-making.  These include[1]:

These scientific findings suggest that jury “deliberations” are actually dueling preconceptions, often won by the most persistent or those who hold their views most strongly (as opposed to careful argument and debate among these lay people).  And these findings also affirm the importance for litigators to develop case stories that contain not just a rational recitation of facts, but incorporate elements of emotional appeal as a context for those facts.

If, in fact, we gave jurors instructions before the trial (or at least the key criteria as typically happens in patent litigation), there would be a chance to help shape the initial “decisions” that are inevitable by addressing jurors’ emotional concerns.  We understand that the system wants to wait until all the evidence is in before instructing the jury because some charges may be changed or dropped depending on the evidence presented.  But, the cost of waiting is high, since people make up their minds and rationalize later (i.e., adapt the jury charge to fit their preference rather than staying open-minded and using the charge as the framework for their decision).  So, withholding the jury instructions until after the evidence has been presented gives more weight to arguments with emotional appeal and elevates their importance when developing a persuasive case story.

Another problem with the current paradigm is that many people learn best through dialogue and by asking questions.  Yet, in most venues, jurors cannot ask questions and even the judges who allow them have (necessary) conditions, forcing jurors to play a more passive role.  The ability to take notes is similar and can also be an integral part of learning.  While notes can be helpful to jurors, it is up to the judge’s discretion whether to allow them and, while there are good legal reasons for not permitting note-taking, it is important to recognize and weigh the benefits and drawbacks.

Absent changes to the system, litigators can make things easier for jurors, even given the passive role they are forced to play.  First, lawyers can take care to structure examination of witnesses in a way to uncover and showcase key evidence as clearly and directly as possible.  Simple things like introducing topics and drawing conclusions whenever possible can pave the way for enhanced juror comprehension.  And, simplifying the process for jurors will also make it easier for jurors to see the case from the desired perspective.  Additionally, lawyers who help bring clarity to the evidence for jurors are seen as helpful, which will add to their perceived trustworthiness.  So by framing questions clearly, there is a dual benefit, increasing credibility for the litigator and client, as well as shaping the direction of jurors’ thinking by providing a clear pathway for jurors’ analysis of the evidence.

A few years ago one of our colleagues was on a ski vacation when a man sitting across from her during a lunch break identified himself as a lawyer preparing a case for trial.  Without any prompting, the man began to tell the story of his case, the opposing arguments and supporting evidence.  Following his quick synopsis, he wanted to know what questions she had for him and which side of the case she thought was stronger.  The man had no idea that our colleague was a jury consultant; he was simply seizing every opportunity he could to gather reactions to his case so that he could learn what questions he should be sure to answer when he presented his case at trial.

This brings up another opportunity for lawyers to accommodate the passive role of jurors.  By sharing the case story with a wide variety of people prior to the trial, whether in a formal mock trial research setting or not, lawyers can gain an understanding of the types of questions jurors may have.  Armed with this knowledge, the legal team can integrate the answers to these questions throughout its case presentation, so that, hopefully, jurors are left with fewer unanswered questions, even in venues where questions are not permitted.

Then there is the way deliberations are conducted.  It is unlikely that most jurors will acknowledge their preconceptions or their “gut reactions” that one side should win (though they will acknowledge gut reactions to witnesses and their veracity).  However, if jurors were instructed to first discuss the pros and cons of each side before expressing their opinions on outcome, the system could be changed to encourage those jurors who are able to overcome their preconceptions to yield to the evidence rather than be guided most strongly by their initial impressions or biases.

To enhance the jury process, the legal system and its rules could also recognize fundamental principles of social science.   That is, when groups are trying to accomplish a goal, there are two types of leaders:  substance leaders who lead for a specific outcome they favor and process leaders who lead (simply) for an outcome that is fairly derived.  Juries left on their own (or where a foreperson is assigned by seat number) are often left at the mercy of substantive leaders who are likely to have an outcome-focused agenda.  If tools could be developed to identify a process leader, the foreperson could be selected and instructed far more intelligently.  This could help encourage the healthy debate upon which the jury system is dependent.

While lawyers are not able to sit in the room with jurors as they deliberate, there are opportunities for lawyers to add structure to unstructured jury deliberations.  First, lawyers can organize evidence in a way that makes it easy for jurors to digest the information.  In closing argument, trial lawyers should refer to evidence by the exhibit numbers, so that during deliberations jurors can more easily find the evidence for which they are looking.  Additionally, expert reports should include clear charts and tables that help to summarize the information in a jury-friendly fashion.  Expert reports are often written without the jury in mind and thus can be extremely complicated.  By organizing these reports in a way that the jury can easily digest the information, the lawyer is again providing jurors with some structure, highlighting the information on which the lawyer wants them to focus.  Last, and most important, is the use of closing arguments.  If a lawyer uses the closing argument to walk the jury through what they think the jurors’ decision making process should be, this will be top of mind as jurors enter deliberations and can act as a road map for deliberations.

In sum, the thrust of our point is demonstrated by the hundreds of mock trials we have conducted.  Most typically, about 36 jurors hear the identical case presentations and then are divided into 3 deliberating panels of 12.  Never (that’s right, never) have all 3 panels come back with the identical decision; sometimes all favor the same side, but still with different outcomes on some charges.

How do we account for this?  Individual preconceptions outweigh the pure rational merits of all cases.  Left to unstructured deliberations (as per the U.S. system), preconceptions held by the most aggressive/persuasive/impressive people on each panel often determine the outcome.  Thus, understanding and addressing those preconceptions, which may be a barrier to reaching the desired outcome, will increase the likelihood of presenting a persuasive case at trial.

Ultimately, while it is time for a review of our system in light of current knowledge and understanding of human decision-making, there are opportunities for lawyers to work within the system to equip jurors for success.   Neuroscientists may now be able to map the cellular process in the human brain as decisions are made, but litigators still have to present their case in a way that leads multiple jurors to see it their way.  And, when considering jury decision-making, that means offering a case story with both a rational structure and emotional appeal.

[1] See  Brocas I. and J.D. Carrillo (2011), From perception to action: An economic model of brain processes, Games and Economic Behavior, 75(1) and Desmasio, Antonio (1994), Descartes’ Error:  Emotion, Reason and the Human Brain 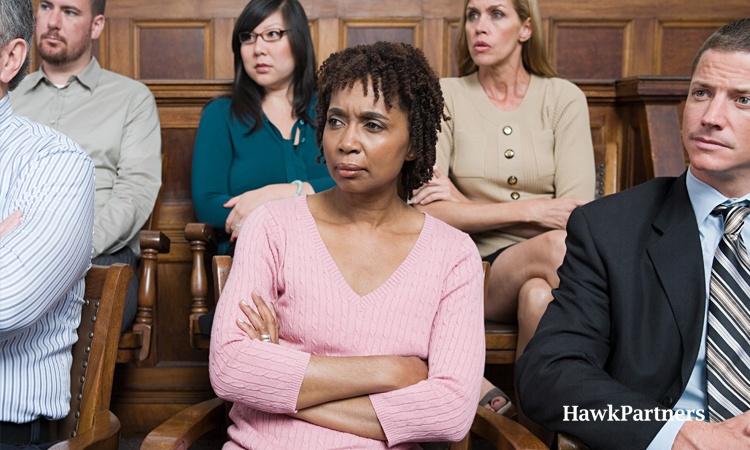 Scoping the Juror’s Head – What’s Going on in There?

HawkPartners offer a perspective on how jury perceptions can be as important as actual evidence in reaching a verdict. 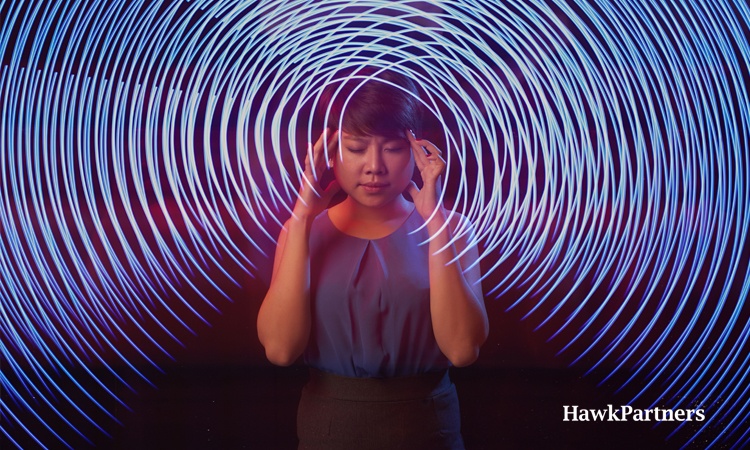 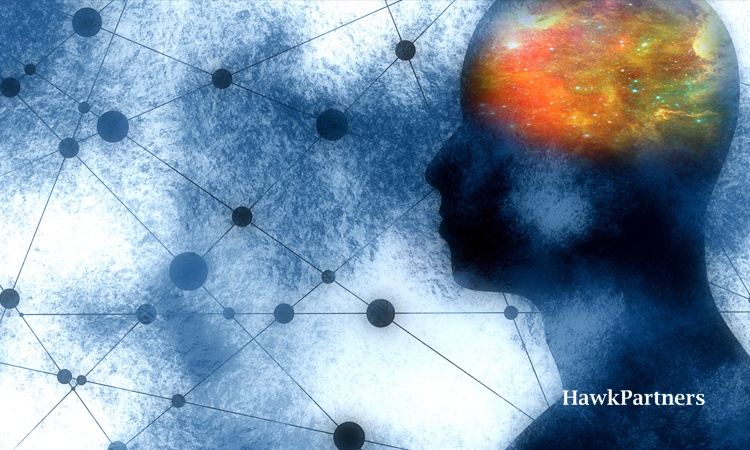 For defendants, complex litigation necessitates that the story be effective in the first case to go to trial as well as those that follow.